Pula – Pola:”Arena is the Roman amphitheatre with the best preserved external mantel in the World and is the sixth largest“ 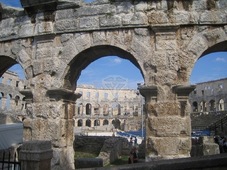 According to the tradition Vespansianus built the Arena following the advice of his loved Cenide.

Probably Vespasianus is better known to the world for the development of public bathrooms, but Pula’s Arena is a true architecture masterpiece and recognition should be given to him and his Cenide.

During Rome’s imperial rule Pula was considered an important town of the Empire and you will get an idea why it was important as you read on.

Arena was completed at the same time as the famous Colosseum in Rome. It is one of the six largest Roman amphitheatres in the World and has the form of an ellipse: 132.5 meters long – 105.1 meters wide and 32.5 meters high.

Today the Arena is the Roman amphitheatre with the best preserved external mantel in the World. 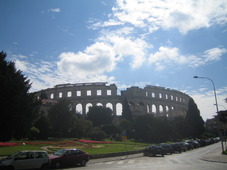 I would like to let you know how sophisticated this building was at the time. Pula had important fullonica (laundry) factories at the time and lavender was used in the fullonica cleaning process.

Lavender and some other Mediterranean plants are very sweet smelling to most people and it is known that during the Roman period the Arena had wells with sweet smelling water placed on the top of the square towers.

These water wells, placed on 32 meters high towers, activated the fountains inside the amphitheatre. This way the Romans actually spread a nice smell into the Arena.

During the Imperial period the spectators’ area could hold up to 25,000 spectators. Gladiatorial combats and other widespread forms of popular Roman entertainment were held in the Arena until the 5th century, when Emperor Onorio banned Gladiator combats.

The central area of the Arena, where the gladiatorial combats were staged, is around 70 meters x 42 meters in size. Today less than half the number of spectators can be hosted. 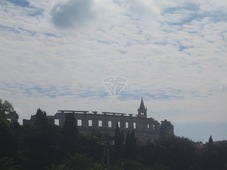 At the time the centre of Pula had about 5000 inhabitants but the Arena’s dimensions and the size of its larger theatre located below Mount Zaro shows us how densely populated the southern part of Istria was.

There were probably over 30,000 people in the area. These large edifices were erected mainly built for the entertainment of this population.

An interesting anecdote is that during Venetian rule the Serenissima authorities decided to transport and rebuild the Arena in Venice, in the place where the public gardens now stand. 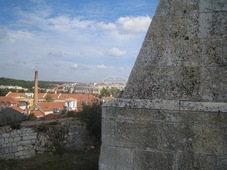 At the beginning of the 17th century there was another idea to demolish the Arena because politicians feared for their town and thought to transform the Arena into a fortress.

Antonio De Ville, who built Pula’s new fortress, prevented us from losing the Arena a second time. The last stones were taken from the Arena in 1709 to build the foundations of the Cathedral’s bell tower.