Why was this beard important? Basically in the middle of the table there was a small hole. This hole was used for the flea. It was a flea the one who in end selected the Zupan. The beard chosen by the flew indicated the new Zupan. 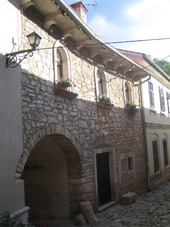 Nearby the table there is also the statue of Ivan Nepomuk, the protector of travellers. From this place you have a beautiful view towards Draga valley.

Opposite to the Perfect table you will see a stone paved street that starts with two stone seats on each side. A long time ago there was located one of the old town gates.

You can take this street and on the right side you will note a house with a vault and three renaissance windows on the first floor.

This house was made in 1442 and is one of the oldest houses in Tinjan and probably in whole Istria. The year 1442 can be seen under the vault on the left side wall. 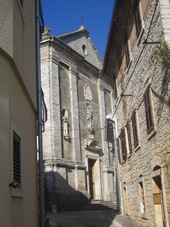 On the top of the street you will be also on the top of the hill where the Church of St. Simon and Judas Tadei is located. The church has a neoclassic façade from 1773. Nearby the church there is a particular bell tower from 1762.

On the right side of the church you will note the door of the school with a stone inscription. This was the school of Juraj Dobrila.

Juraj Dobrila was the Bishop of Porec and of Trieste, and is considered one of the most relevant Istrians of the time.

Dobrila was the promoter of Slavish nationalism and was native from Veli Jezanj located nearby Tinjan.

Josip Voltic was native from Tinjan and he was the linguist and lexicographer. He wrote the first Croatian-German-Italian dictionary. 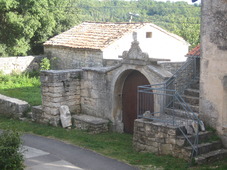 If you walk few meters on the right of the old Juraj Dobrila’s school you will note a pretty house on the left side with three vaults on the first floor and a lovely well.

Opposite to this house there is an interesting doorway with a Baroque decorations and a head sculpture above it.

In Tinjan’s photo gallery you will find few pictures of the main buildings mentioned in the text above.

Tinjan was, like many others Istrian town and villages, a prehistoric hill fort settlement. It was also a Roman settlement named Attinianum.

At the time Tinjan was named Antoniana. Officially Tinjan became part of the County of Pazin in 1368.

In 1342 Counts of Gorizia that were the owner of the County of Pazin split their properties among three brothers and Alberto IV became the new Lord of County of Pazin. In that document Tinjan was named Tignan.

In 1343 County of Pazin entered into war with Venice and Venetians occupied and destroyed the fortification walls of Tinjan. Alberto IV accepted in the following peace agreement that he would not rebuild the walls any more.

In 1374 Alberto IV died and the Austrian Hapsburg family became new Lords of the County of Pazin.