Zavrsje – Piemonte d’Istria: “Contarini’s palace from 11th century is the most important secular building in the village” 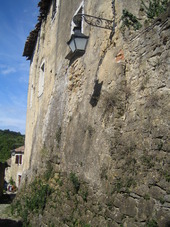 When you arrive near the hilltop you will see an impressive palace. This is the Contarini’s palace dating back to the 11th century, the most important secular building in the village. Contarini family ruled over Zavrsje for three centuries.

On the top of the hill there is another Church dedicated to the Blessed Virgin Mary. It was built in the 16th century and what is interesting is that the bell tower of the church  is leaning like the more famous Pisa tower in Italy. Inside the church there are several interesting artworks.

There is an interesting story regarding the beautiful calyx made by “Zuanne Frintz” and donated in 1476 by Pietro Funes to the Church. The calyx was sold at the end of the 18th century to Rothschild family and today is in the Louvre Museum in Paris.

All around you there are abandoned houses without roofs from the 16th and 18th centuries. From there you can start walking down the hill towards the recently modernized Contarini’s town gate. Outside the gate there is another small Church of St. Rock built in 1556.

With its long and rich history and nice architecture, Zavrsje is another place that a visitor interested in Istrian culture and history should visit.

On the road towards Zavrsje you will see a lovely agritourism Montizel. Montizel is owned by Edo Pincin and is located in the place called Montizel near Zavrsje. Edo Pincin is also a quality wine producer, while the most important quality olive oil producers in the region are Milan Vizentin, from Vizentini, and Dino Antonac from Antonci.

In Zavrsje’s photo gallery you will find most of the pictures of the buildings that have been described above. 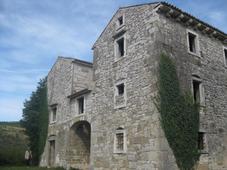 If you exit Zavrsje from the side where the church of St. Rock is located and continue to follow the white road that goes towards Kostanjevica you can reach another nice Istrian building known as Stancija Silic. This is another nice example of the old Istrian architecture wehre the Main Building was probably used for living while the secondary building, with its particular and small windows, was used for defence. Hopefully this property will be restrucutred in the following years and its antique beauty will be restored.

Like most of the Istrian towns, also Zavrsje was a prehistoric hill fort settlement and it was a fortified Roman village. In 1102, Zavrsje, at that time named Piemonte, was donated by the Marquis of Istria, Ulrich II of Weimar, to the Aquileia Patriarchs. In some documents from 1341 and 1508 the town was named Pyamont or Poymont and in 1427 Germans named it Pemund.