The Baroque confessional and the Venetian Lion of St. Mark, high quality woodwork and remains of frescoes and flooring of St. Mary Magdalene’s Church could be considered among the most valuable sacral possessions in Istria. The church also hosts the St. Lorenzino’s hand.

There are several assumptions that the old Illyrian town Faveria could have been located in the area nearby Mutvoran. Faveria was destroyed by Claudio Pulcro in 177 BC when Romans occupied Istria. 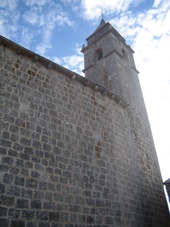 The other names we find are Momorano, Momarano, Monmarano and Mommarano. Some names were in origin linked with St. Mary Magdalene and several places around Mutvoran and also its Parish Church are named St. Mary Magdalalene.

During the Roman period Mutvoran was a castrum and the castle of Mutvoran was one of the oldest castles in Istria.

On the prehistoric hill fort settlement foundations the castle was built in the 5th or 6th century.

The fortification system was enforced in the Middle Ages and also the impressive three doors gates were the only gates to enter the village.

In the 9th century Mutvoran passed to Bishops of Pula and in 996 became a property of the Aquileia Patriarchs. In that period Mutvoran was one of the most important settlements in this south eastern part of Istria.

In 1331 Pula became part of the Venice Republic and also Mutvoran became part of Venice but the Venetian Senate decided to give half of the feudal rights over Mutvoran to the family Castropola.

In 1380 the Aquileia Patriarchs occupied for a year the town but a year later it was returned to Venice. In 1413 Mutvoran was occupied again by the Hungarian soldiers that demolished the town walls but few years later, in 1419, were rebuilt.

In 1509 Bishops of Pula gave the feud to family Elio Condulmier although the Bishops did not have the power to do so.

At the beginning of the 17th century the town was involved in the war between Austria and Venice, also known as Uskoci war. During all this centuries there were many plagues and wars and immigration was very often the only way to restore the life in the area.

Over the time Krnica, that is not far away from Mutvoran, gained more importance. Until the fall of Venice a Venetian official, named Captain, was nominated to rule the village.

After the fall of Venice in 1797, Mutvoran was part of the Austrian Empire and for a short period of time was under Napoleon domination. After the First World War and fall of the Austro-Hungarian Monarchy, Mutvoran, was part of Italy and after the Second World War became part of Yugoslavia (Croatia).

After the second World War Mutvoran became part of Yugoslavia (Croatia). There were three agreements between Yugoslavia and Italy which established that Istria would become a part of Yugoslavia: Paris Agreement of 1947, London Memorandum of 1954 and the Osimo Agreement reached in 1975. In the first decade after the Second World War many Istrians, especially those living in towns and villages that for centuries were part of the Venice Republic, decided to leave Istria.

In 1991 with the fall of Yugoslavia and the founding of the Republic of Croatia, the internal republic boundaries were recognised as the state boundaries and Mutvoran is today part of Croatia.