Brijuni – Brioni: “During the summer Small Brioni island become a theatre under the stars where theatre group Ulysses every year present something interesting” 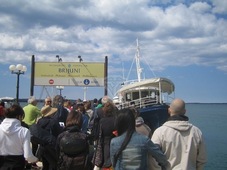 If you want to visit the Big Brioni you need to go to Fazana and take the tickets for the boat. The tickets include a guided tour of the island and you have to book the visit at least one day before.

During the summer Small Brioni island become a theatre under the stars where theatre group Ulysses every year present something very interesting. The problem for the foreigners is that the theatre is mainly in Croatian.

Rade Serbedzija, a World famous actor, is one of the main drivers of Ulysses’ group.

If you are lucky you may also assist to the World famous guitar players like Vlatko Stefanovski and Miroslav Tadic or violin player Stefan Milenkovic. It is worth to check every year at the beginning of the summer what shows will be presented on Small Brioni.

The current hotels you see in the port are only parts of the hotels that existed before the war because Germans occupied the islands after the Italian capitulation at the end of the 1943 and the allied forces heavy bombed the island at the end of the second World War. The only building that has been completely preserved is the boathouse.

In reality, the most interesting building you will see in the port is the boathouse. You will recognize it on your own because the basement was projected for the boats. It is located nearby the Hotel Neptun and Istra and was built in 1902.

What is also interesting to mention is that this was the first house built on the island with the reinforced concrete which was a novelty in the construction technology of the time. In origin the house was planed only as a roofed-over boat storage building but later on Paul Kupelweiser decided to build an additional floor.

From 1903 until 1938 it was the surgery house of the island run by the doctor Otto Lenz who lived with the family in the building. This beautiful building is the only fully preserved building on the island built in the Art Nouveau style.

Your visit of the island with the train will start from the square named Friendship square and with the train you will pass near to several important places but most of them you may prefer to visit taking little bit more time on your own.

The train will take you around and the guide will tell you a short story about the islands. The first buildings you will pass nearby are the castle from the 12th century and the Church of the St. Germaine from the 15th century. Today this church houses a permanent exhibition of frescoes paintings from Istria and Glagolitic inscriptions from Istria and Kvarner. When you finish the ride with the train I advise you to visit those buildings dedicating a little bit more time to them.

Nearby the castle and the Church of St. Germaine there are several other interesting places to visit that are not far away from this place.

In the northern direction you can see the Robert Koch walking area with a nice stone made sculpture in his honour made by Joseph Engelhard in 1905. Hundred meters from there, in the same direction, there are two museums.