The place was projected by the French architect Gabriel Le Terrier Du Manetote and built by the Kopar constructor Bracciaduro. A part of the beauty of the architecture of the complex also the Italian style garden was probably pretty at the time.

For sure this complex witness the wealth and high culture of living of the upper social classes in the north western part of Istria during the 18th century.

All this villas and palaces have developed following a smiliar concept. They have in the centre of the complex the main building and on the each side the lower husbandry or secondary buildings. Each mentioned villa is worth to be visited. 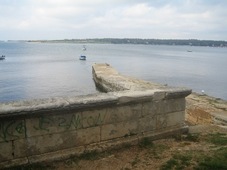 Dajla was inhabited since Roman period and some ruins proves that is likely that Greek monks founded a Monastery in the 5th and 6th century in this place.

The Monastery was dedicated to the St. John the Baptist and from the 9th century it was a Benedictine Monastery.

In 1028 the Emperor Corrado II donated Dajla, at that time named Ayla, to the Aquileia Patriarchs and ten years later was turned back to Carrado II and he gave it to Novigrad’s Bishops.

In the 13th century the Monastery was dissolved and Novigrad’s Bishop Nicolo’, in 1273, gave the property to Almerico Sabini from Kopar.

In 1348 Vecelino de Sabini participated in a revolt organized by Kopar against Venice and due to this fact Venice decided to confiscate his property. 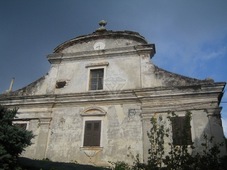 In 1736 family Grisoni from Koper became successors of Sabini family. In 1775 Count Santo Grisoni started to built the current complex and his son Francesco will complete the work.

In 1783 a new Baroque church was built and in 1830 the building of the main neo-classical building started. The last building was completed in 1839.

In 1835 Francesco lost his son and decided to donate the property to Benedictine order of St. Mary from Praglia, located near to the Italian city of Padua. The condition he proposed to the order is to set up an elementary school on the property.

In 1841 he died and in 1858 his wife Marianna Pola Grisoni died and the property passed to Benedictine order few years later.

The property functioned as an example of good functioning agricultural company.

In 1948 the Monastery was confiscated and turned into almshouse, an old people’s home.

In 1989 was abandoned because to old people were transferred in Novigrad and today the property expects new investors that could return the beauty to this unique Istrian countryside complex.