If you continue to walk nearby the coastline you can enjoy the view of the fisherman boats and after few meters you will arrive in a small square with the Parish Church of Saints Cosmas and Damian built in Gothic style in the 15th century.

Nearby the church there is also Fazana’s bell tower. Inside the Parish Church you can see the remnants of Renaissance frescoes from the 16th century.

You can follow the side street of the church and after few meters you will arrive nearby a lovely small Church of Our Lady of Mount Carmel. The portico and the bell gable are from the 9th century and inside of the church is decorated with Gothic frescoes from the 15th century.

If you take the road that goes towards left, towards Peroj’s direction, you will arrive near to the cemetery Church of St. John from the 16th century. If you take for few hundred meters the road that goes nearby the cemetery on the right side, you will arrive near the oldest Fazana’s building that dates back into the 6th century. This old countryside church is dedicated to St. Eliseus.

This old church was built on the remains of a Roman country palace erected few centuries before. In front of the main façade you can still note some remnants of the previous building. 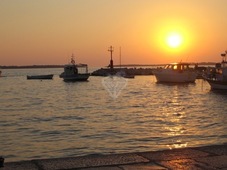 If you want to bring with you a particular artistic work that will remind you of Istria I would advise you to try to find something made by Sasa Matijasic. Sasa Matijasic is a sculptor and artist that creates special objects mainly in olive wood.

He lives in Fazana and is also one of the traditional sponsors of the Smrikva Bowl. Every year he prepares for the tournament a special gift made in olive wood with Smrikve coat of arms that we give to every Smrikva Bowl player.

During the summer time, on Fazana’s coastline, there are many restaurants where you can enjoy food. In other periods it is a very nice walking area. I use to leave the car on Hidrobaza - Puntizela, one kilometre far away from Smrikve, and walk from Valbandon, Bi Village and Fazana until Peroj and back.

This walking area is nearby the coastline with the view towards the Brioni islands and seagulls will fly all around you. In the evening there is a beautiful sunset and you can enjoy it almost every day because of the good weather.

A place where is possible to taste a good food near Fazana is agritourism “Alla Becaccia” in Valbandon. Valbandon is located on the road that goes from Smrikve to Fazana.

If you would like to taste another good wine that is cultivated not far away from Smrikve I would advise you to try Dario Marceta’s wine from Valbandon. 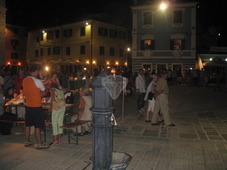 In a cove nearby Valbandon another beautiful villa rustica was found. This villa rustica can be compared to the one located in Verige Bay on the Brioni islands. It had richly decorated floor mosaics displaying floral and geometrical motifs. It was a pure luxury building with all the comforts of the richest villas from the Roman period. Valbandon had the water a few meters under the ground and Romans knew how to take advantage of this gift of the nature.

Fazana as most other Istrian towns and villages was a Roman settlement. At the time was named Phasiana.