Novigrad – Cittanova: “Unique example of Istrian loggia that is placed on the external part of the fortified walls"

“Speron” wall was about 40 meters long and was part of towns defence system that forced ships to navigate on a certain distance from the town.

Not far away from the round tower “drio i torci” you will also see the town loggia that was built in the 16th century. Nearby the loggia there was also the old granary house, “fontico”, from the 14th century. This loggia has a beautiful view towards the sea and is a unique example of Istrian loggia that is placed on the external part of the fortified walls.

Nearby the loggia there is another gate named “belvedere” gate. This gate was transferred to the current place from the old port. If you continue to walk near the coast line you will see another round tower that is named Bishop tower.

Between the Bishop tower and the Parish Church there was the Bishop palace that was demolished at the end of the 19th century but is still called Bishops’ place.

Few hundred meters from there you will find the biggest round tower that is also named the tower of the port. You can continue to walk near the old port and the house with the sun clock on its façade and you will arrive near to the town walls where we started the visit of the outside town walls.

This place was also the place of the old town gates that was named land town gates. Following the main street you can walk toward the centre of the old town. The old town have preserved the Roman urbanization structure that have developed around Decumano and Cardo streets.

In the centre you will see a small square with several nice houses built in 1800 on your right side and on the left side there is the Municipal palace with a tower and a clock. 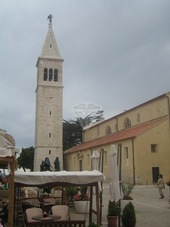 In front of you there is the Parish Church of St. Pelagius and Maximus with a bell tower. Remember that between the square where the Municipal palace is located and the  Parish Church there is street that goes on your right side that has two beautiful buildings that are worth to be seen.

The Parish Church is a three naved basilica that dates back into the 5th – 6th century. It was restructured in the 8th century by the Bishop Maurizio. The church was renovated several times and the present day façade was completed in 1935. Its Baroque interior dates back into the mid 18th century. The bell tower is from 1883 and was built following the design of St. Mark’s bell tower in Venice. Many most important Istrian bell towers followed the design of the tower of St. Mark.

Inside the church for 1 Euro you can visit the early Romanesque crypt from the 12th century that is a particular architectural art work. It is the three naved crypt located below the church sanctuary with cross vaults sustained by the columns.

If you take the road that goes between Municipal palace and the Parish Church towards north you will see on your left side one of the most beautiful buildings of the old Novigrad. This is the Baroque palace of the Rigo family that was built in 1760 by Giovanni Urizio. Today its first floor houses a collection of stone monuments with Antique and Medieval monuments, and those related with cathedral's original form.