The first names theatre had were: Rubineo and Arupinum. Later on the theatre was named Gandusio in honour to Antonio Gandusio that was an actor born in Rovinj in 1873.

As I wrote before Rovinj was an island and the first impression you have entering the street named Svalba is the impression of entering into a ring. This street was built in the second half of the 17th century.

If you look carefully you will note on the façades some old families coat of arms. There is also a small Lion of St. Mark. What I really like most in this street are the stairs and the streets that ends up in the sea, like in Venice. During the evening the place became very romantic and charming.

I would advise you to stop at Angelo d’Oro hotel that is located on the left side of the street and enter the inside garden of this lovely and charming place. You can enjoy an ice-cream in the silence of this lovely place. After the ice-cream you can continue to climb the steep road, among Venetian styled palaces, towards the Church of St. Euphemia.

Few meters after Angelo D’Oro hotel, on the same side of the street, you will note a small Church of Our Lady of Health. This church was built in 1779 by the family Biondi. The church is identical to a church in Venice projected by the architect Simon Battistella. The stucco works inside the Church of St. Thomas, that I will mention later on, were also made by Simone Battistella.

Not far away from the Church of Our Lady of Health you will be near the most western part of Rovinj where a lighthouse is located. From there, if you look towards the hilltop, you will already see a beautiful Venetian bell tower that was completed in 1677.

Once you arrive in front of St. Euphemia you will be rewarded with fabulous views of the sea and the islands of St. Catherine and the Red Island, or St. Andrew’s island. Both islands have some interesting buildings to be seen. The first Island had the tourism developed on it thanks to the Count Milewski and the Red Island also had it thanks to the Count von Huetterott.

On the Red Island a Benedictine Monastery was built in the 6th century. In 1420 the Monastery was taken over by the Franciscans who remained there up to 1820. Part of this old Monastery and the central part of the pre Romanesque church were incorporated during the 19th century into a complex that Hutterot created as his private villa. Today is a part of a newly built hotel. 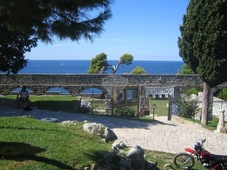 You will note that the Parish Church of St. Euphemia was built on the plateau on the top of the hill. Due to its dimensions, three other churches were pulled down: St. George’s, St. Ursula’s and St. Michael’s.

The first phase of construction lasted from 1654 till 1677. During that period the bell tower was built following the model of St. Mark’s bell tower in Venice. 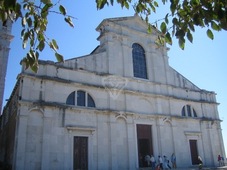 The architect that projected the over 57 meters high bell tower was Alessandro Manopola, while the architects that followed the execution were all from Milan: Antonio Fassolla, Antonio Man and Cristoforo Ballan.

From 1725 to 1736 the three-naved church was built in Baroque style according to the blueprints made by the Venetian architect Giovanni Dozzi. The church has three altars designed by the Venetian altarist Girolamo Laureato in 1741, while the altar sculptures were built by one of the most renewed Venetian Rococo sculptors Alviso Tagliapietra.