Once you park the car you will find the main street that will bring you to the large square where the Parish Church of the Assumption and St. Peregrin is located.

Before entering the main street on the left side there is a Church of St. Rock from 1515 that is used today as an art gallery.

Few meters from there you will be on the main square. Many buildings on the left side, or northern side of the old town were built recently, while in the southern part there are several centuries old streets and some older buildings. 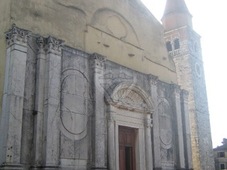 The Parish Church of the Assumption and St. Peregrin was built in the Baroque style in 1757 on the site of an earlier church. The architect of the church was Zuane Dongetti from Piran who projected also the Parish Church of St. Servulus in Buje. The two churches have some similar architectural elements that you should note comparing the two buildings. In addition the façades of both churches have not been completed.

There are several interesting art works hosted in the church and the most significant one is the organ from 1776 and a Gothic polyptych from 1440. Beside the church there is the bell tower from the 15th century with a stone relief that represent the Venetian Lion of St. Mark from the 13th century. This Venetian lion was displaced on the façade of the Municipal palace with loggia that was located on the opposite site to the bell tower.

The old Municipal palace was dating back into the 13th century and was destroyed in a fire in 1924. There is also another stone relief that represents the St. Peregrin, town’s patron Saint, with a model of Umag in his hands. This stone relief dates back into 14th and in the past it was located above the main town gate.

Behind the bell tower there is a public well built in 1677 and later on restructured several times. It was restructured in 1780 and probably more recently because today it has quite a modern aspect.

On the back of the church there is a small square named “Corte delle Ore” which in English would be “The Hours’ Court”.

The origin of this name derives probably from the fact that the nearby bell tower was signalling hours with the bells creating noise sounds and people gave to the square such a name.

If you walk nearby the coastline taking the left side from the church, you will arrive to the round tower that was built in the 14th century. The rests of the town walls are from the 11th century. To visit the oldest street of Umag you need to go back on the main square.

On the square, near the public well, you will see a house with a pretty Venetian or Gothic “bifora” window.

This is the start of the oldest street of Umag. Most of the houses you will see are from the 15th and 16th century. You can walk through this old street and a particular detail that you will note is the Renaissance “bifora” window with a coat of arms above it. You will recognize this “bifora” because it has a round voult form of the window.

At the very end of this street you will arrive to the rests of the town walls and the town museum that is hosted in the Meneghei tower.