Vrsar – Orsera: “Montraker was a quarry since the Roman times and Konversada the first Europe’s commercial campsite”

The Parish Church, nearby the castle, have a very simple façade and is dedicated to St. Martin. It was completed in 1935, while the bell tower was completed recently, at the end of the 20th century. For centuries Vrsar did not have a “representative” bell tower.

On the right side of the Bishops castle you will note another small gates that are named castle gate. If you pass this gate and take the street that goes on the left you will walk nearby the two round defence towers of the castle that dates back into the 13th century. Most of the houses in the old town are nice and well restructured. The walk around the old town is charming and offer beautiful views towards the sea side.

On the northern part of the old town, always near to the Bishops’ castle, there is a hackberry tree with several park-benches where you can enjoy the belvedere towards St. George’s island and peninsula Montraker in front of you. 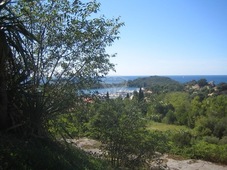 Montraker is an abandoned quarry and since the Roman times the stones were taken from this quarry to built the most representative buildings in Istria and later on in Venice.

Since 1991 a summer sculptors’ school Montraker has been organized and it lasts every year for  three weeks starting the last week of August.

If you continue your tour towards south you will arrive to the picturesque square with several interesting secular buildings and the second old town gate that dates back into the 12th – 13th century.

This gate is named St. Anthony gate. Above the gate you will note a small stone coat of arms with the Lion of St. Mark.

Once you pass the gate on your left side there is another small Church dedicated to St. Anthony from Padua dating back into 1656. The porch of this small church is very particular and looks like a Venetian loggia. 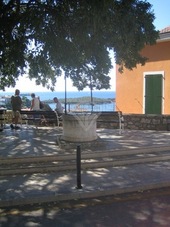 In front of the church there is another hackberry tree with a stone well and a beautiful view towards southern and western coast line of Istria. From there you might be able to see also Koversada island.

Four decades ago, on the island Koversada, a naturist campsite was opened, which later spread along the coast and turned into one of the largest naturist campsites in Europe. Vrsar has gained its recognizable tourist image by promoting the so called “naturist culture”.

Konversada was Europe’s first commercial naturist campsite and even today remains the most recognizable tourist symbol of Vrsar.

Giacomo Casanova was in Vrsar twice in 1743 and in 1744 and for sure he would be pleased to know that naturist campsite was opened in Vrsar.

Casanova was very young at the time of his visits to Vrsar. He was only 16 years old but in his memories he clearly writes about Vrsar, its good Refosc wine and beautiful woman.

It is known that Giacomo Casanova also visited Pula and several times Bale. It is likely that Casanova had a love affair with the owner of the Bale’s Castle, Mrs. Bembo.

There is another important medieval building that you should visit in Vrsar. It is the three-naved Church of St. Mary of the Sea that dates back into the 8th century.