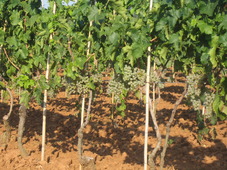 There are almost no families that do not produce their own olive oil and wine, at least what is needed to be offered to their guests and close friends.

There is an old Istrian saying: ”Vino od loze i mliko od koze” and “Kruh je za tilo a vino je za dusu”. The translation from Croatian  is difficult because you loose the feel of the language.

Every place you decide to visit on Istria from Smrikve lists local family producers who significantly contribute to the increase of the overall quality and reputation of Istrian olive oil and wine. The main Istrian wines are: Malvazija, Terran, Refosc and Muscatel.

The most important is probably the Istrian Malvazija - Malvasia Istriana. The story of Istrian Malvazija, cultivated in Istria since the end of the 16th century, is fascinating and it relates to the Venetians.

At the beginning of the 15th century the Venetians occupied Peloponnesus in Greece. In the Peloponnesus region there is a town Monemvassia, also named Malvasia. From this town the Venetians started to import the wine into Venice and the other areas controlled by the Venetian Republic. This wine was so successful and became so famous all over Europe that Venetians decided to plant huge vineyards on the biggest Greek island, Crete. 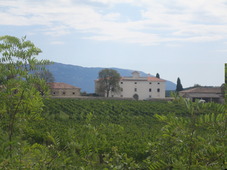 Between the 16th and 18th century Malvasia become the most important wine in Europe. In 1570 the Turks conquered Crete and Venetians decided to plant Malvasia vineyards in other areas that had friendly relations with Venice which, at that time, also included Istria.

In end Malvasia is in Istria since the above mentioned period while it is not known the sort of the wine that was preferred by the wife of the Emperor Augustus, Livia Drusilla – Julia Augusta.

During the Roman Empire period, Istrian olive oil was among the best in the whole Empire. The wine was also of a good quality, but it is hard to determine exactly what sort of wine was produced. It was documented by Plinio the Elder that Livia Drusilla, the wife of the Emperor August and mother of the Emperor Tiberius, was drinking only the wine Pucinum. It is assumed that this wine could have been from Sovinjak in Istria.

Plinio the Elder wrote: “Iulia Augusta (Livia Drusilla) lived to her 85th year of age by merit of the wine Pucinum; and drinking only that wine, whose grape grows in the Hadrian’s Bay, not far from the spring of Timavo, on a rocky hill…”

You will learn that Pula was one of the richest towns in the whole Empire and the nearby places were important for Julio Caesar’s father-in-law, Sergi family, Lecanio family, Emperor Augustus, Emperor Claudius, Emperor Vespasianus and many others.

Dario Alberi wrote one of the most interesting and detailed books about Istria that I had the opportunity to read. The name of the book is: ”Istria – Storia, Arte, Cultura”, ”Istria – History, Art, Culture”. This book was very important for the production of Istria from Smrikve. He spent seven years writing this long book by using a bibliography of over 330 books. Every important Istrian building was not photographed but hand drawn.

For the production of Istria from Smrikve over 6000 working hours were needed. You will find information about over 90 Istrian towns, villages and protected areas. To take all the photos of the places, buildings, towns and villages over 3000 kilometres were made.

The majority of the towns that are described have been inhabited since prehistoric times so most of them have over 3000 years long history. Istria from Smrikve contains over 550 pages of the written text and over 2000 pictures.