In addition a database of over 450 families have been gathered to provide the tourist interested in Istrian culture recommended places where they can taste traditional Istrian food, wine and olive oil. 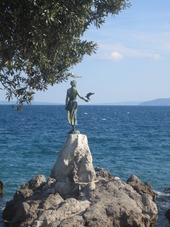 Before you start the visit of towns and villages, I would try to give you an idea of the most beautiful and representative Istrian towns and villages by grouping them into few historical clusters: prehistoric sites, the Roman Empire period, the Byzantine Empire period, the Middle Ages, the Venetian Republic period, the period of Austria, the Austro-Hungarian Monarchy period, the period of Italy and the post World War Two period. This is the initial idea for creating a particular cultural itinerary that you could be interested in.

Almost every Istrian town has lived trough all this different cultural periods but in some towns, as visible in their buildings and structures, the influence of certain periods is more prominent.

I hope you will find interesting Istria From Smrikve and would be lovely if, after the virtual tour, you decide to include Istria among destinations you would like to visit.

Many Smrikva Bowl contestants and their families come back to Smrikve to enjoy their holidays and to prepare for important tournaments. They are main promoters of "Istria from Smrikve"