The church is not open for public and you will need to ask the key of it to people in Beram and a person will come with you to show you the paintings. You will note that the porch is a little bit different compared to the other Istrian porches. The difference is due to the fact that was added later on in the 18th century. At the time also the two windows you see on the façade were made.

You will note, once you enter inside the church, that the frescoes were damaged to create those two windows. The outside holy water stoup near to the main doors dates back in the time when the church was erected. 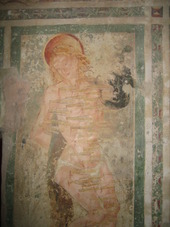 The whole inside of the church is painted and also the ceiling is very particular. The ceiling, made of painted Baroque tabulas, was made in 1707. Originally this church had a Gothic vault.

The whole church is covered with late Gothic frescoes whose scenes are divided into 46 painted fields and in total painted area is around 75 square meters.

The frescoes were made in 1474 by Vincent from Kastav and at least two assistants, as can be seen on the inscription on the southern wall nearby the side doors. 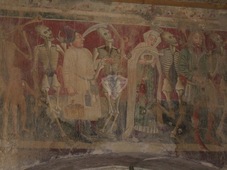 You would need to buy a book with detailed explanation of the paintings. The most famous is the Dance of the Death on the western wall and is particular because between every and very different classes a skeletal figures is painted, entwined in a dance.

The interpretation of this dance is like a warning that all human beings are equal at the moment of death.

This type of motif in wall paintings was common in the Middle Ages in some others European countries like: Germany, France and Italy.

On the same wall there are also the paintings of Adam and Eve and the Wheel of Fortune. Those frescoes are partially damaged by the windows that were opened on this wall.

The longest composition, eight meters long, is the Homage of the Three Kings paying reverence to Jesus, with the suite of medieval knights, musicians, falconers, court jesters and pages that is painted on the northern wall. It is likely that Vincent used physiognomies of his contemporaries.

There are many other painted scenes from the Bible that are represented on the walls but for the more detailed analysis you should take a dedicated book.

This frescoes are considered a combination of a refined international late Gothic art and the folk figurative tradition that make them a real gem of Medieval fresco painting and, in particular, one of the most significant art works of the Istrian wall paintings.

In Beram’s photo gallery you will find few pictures of the village and its famous frescoes paintings.

Like many other Istrian town and villages also Beram developed on a site of a prehistoric hill fort settlement and its name has likely the pre Roman origin.

The settlement was inhabited for over 4000 years and a lot of remains from the other people from outside Istria were found in Beram.

Many centuries ago the hilltop where Beram is located was named Burgar and is likely that this old name derives from the German word Burg that means castle.