Buzet – Pinguente: “From 1511 it was a Venetian administrative centre, where the Raspor’s Captaincy was headquartered”

From 1511 Buzet was a Venetian administrative centre, where the Raspor’s Captaincy was headquartered. 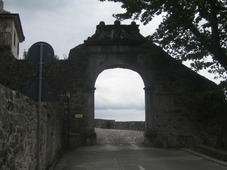 Buzet has oval structure and the visit of the town starts passing trough the large town gates dating back to 1547. There are several interesting buildings in the old town. When you enter the town, there are two streets you can take. Both will take you towards the main square where the Parish Church is located. If you take the street on your right side you will see some nice palaces with their stone coats of arms on the façades. 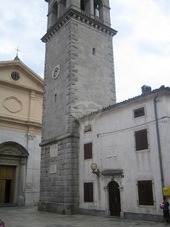 On the main square there are several interesting buildings that you can see. There is the Parish Church of the Assumption of the Blessed Virgin Mary, built in the 18th century, in front of which there is a 36 meters high bell tower built by Andrea Vivoda. 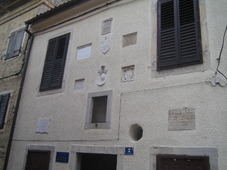 Opposite the Captain Raspor’s house, you will note the former Municipal palace. You will note that in Buzet’s old town every historic building has a note on the façade that indicates why the building was important. 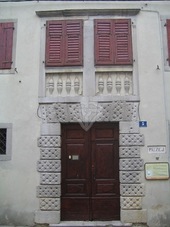 To continue the visit take the first street on the left after the Captain of Raspor’s house and you will arrive in front of the town museum. This building was a former Bigatto family house built in 1639. Numerous exceptionally valuable artefacts from the Buzet necropolis as well as from the remains of the Roman settlement Pinguentum are kept in the museum.

On the wall, on the left side looking towards the museum, there is a stone box from 1725 that was used to denounce the destroyers of the woods in the region: “denoncie secrete contro fanneggiatori dei boschi dela provincial”. 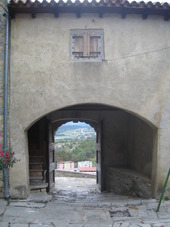 Another similar box, with Lion mouth, was placed on the Municipal palace in the 15th century against the cutters of the vines and olive trees.

Now you are few meters away from the second town gates, named the small gates and built in 1592 by Podesta’ Carlo Salomon.

It is interesting that the coat of arms placed above the small gates is the coat of arms of the family Salomon dating back into 725. Opposite to the town gates there is the “fondaco”, the grain house. It is a building from the 16th century with several coats of arms on its façade.

Now you are very near to another small square that is characterized by a beautiful Baroque well in the middle. Since Buzet was a significant military and administrative Venetian stronghold it was important to build a water storage system.