Draguc – Draguccio: “Some of the most famous frescoes paintings made by Anthony from Padua in 1529 and 1537” 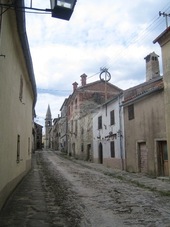 Antonio Grossich was a doctor of Hapsburg Monarchy who in 1908 invented the disinfection with tincture of iodine. After the first World War he lived in Genova and became Italian senator. 30 meters from there you will be on the main square.

On your right side there is the Parish Church of the Holy Cross dating back into the 15th century. 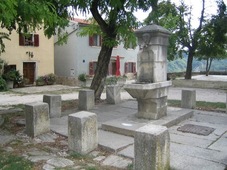 The church has been expanded several times later on. Besides the church there is 28 meters high bell tower built in 1847.

The main square is quite big and on the left side under the centuries old hackberry trees you will note a fountain from 1888 and the Judge’s table. This is the County Perfect or Zupan’s table that can be seen also in other Istrian towns like Hum and Tinjan. 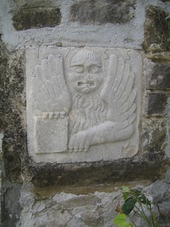 On the same square in the left angle of the square there is a defence bastion from 1570. On the defence bastion there are two interesting stone bass-reliefs that will take your attention.

On the left side there is a coat of arms of Francesco Basadonna who built the defence bastion and restructured the town walls from the 14th century. On the other side there is a Lion of St. Mark with the open book. This sculpture is very similar to another Lion of St.Mark that is hosted in the town gates of Motovun.

Lion of St. Mark with open and closed book had different meanings for Venetians. 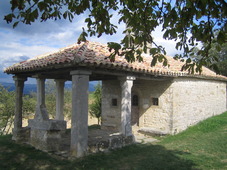 Between the defence bastion and the Parish Church there is a pretty subway gate that will drive you towards the Church of St. Rock.

The passage is particular because it has some nice arches and on the left side you can see the old “fondaco”, a storage for grain house. Trough the passage you will arrive to the end of the town. 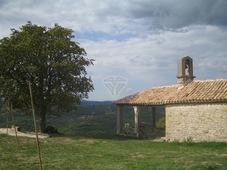 In front of you there is a beautiful view towards the western part of Istria and on the very border of the hill stands this small church with its characteristic Istrian porch.

Although it has a typical Istrian porch this one has a very particular central column that could have been used like the altar. This central column make this porch an unique example in Istria.

The Church of St. Rock was built in the 16th century and hosts some of the most famous frescoes paintings of  Istria.

This frescoes together with the one in Beram are among the most famous and beautiful one. They were painted in 1529 and 1537 by Anthony from Padua (today Kascerga). Every wall inside the church even the roof is painted.