There is a parking area on the top of the hill between Hum and its cemetery where you can leave the car. 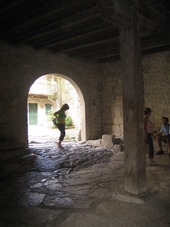 Walking towards the well preserved town walls you will see the town gates erected in 1562. There are double gates to enter the town and in the middle of the town gates there was a Venetian “fondaco”, the storage for grain, and the guardian building of the castle.

When you pass through the town gates you will find yourself on the main square. Basically there are only two small streets in the town, following the Roman Decumano structure. The visit of Hum is a lovely visit and it does not take much time.

The town walls are still well preserved and the castle that was once in the middle of this square has not been preserved and can not be seen. The town aquired its current features probably back in the 11th century.

The Parish Church is located on the main square. It is not clear to whom it is dedicated. Various sources have different theories: the Assumption of the Virgin Mary, Saints Peter and Paul, St. Geronimo and St. James. 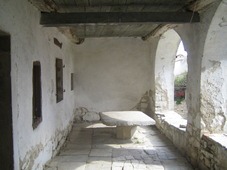 It is most likely that is dedicated to the Assumption of the Virgin Mary. The church has a classical façade and was completed in 1802. The earlier church was built on the same site in 1609. Near the church there is a bell tower built in 1552. It has features more akin to a defence tower than to a bell tower. On the same square you will also note the vaults of Municipal loggia with the County Prefect’s Table. The County Perfect is in Croatian called “Zupan”. 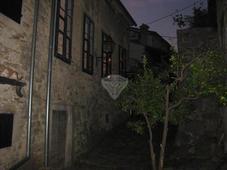 The town maintains the ancient traditional custom of electing the County Perfect, every year in the second Sunday of June.

In particular, in the Municipal loggia every citizen of the town votes by making a notch on a wooden stick that is called “rabos” and in this way they elect the County Perfect.

This Municipal loggia was the main administrative meeting place of the town in the past.

Hum is quite unusual for the Istrian towns because it has both loggia and County Perfect's table. Historically the towns that were part of Vencie used to have the Venetian loggia while the town that were under Aquileia Patriarch and later on Austria used to have the "Zupan" table.

Leaving the main square and taking the upper street towards the eastern part of the town there is a very nice shop. It is the outlet selling traditional crafts produce, some good wine and the famous Biska brandy. 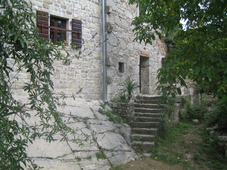 On the eastern part of the town there is also a nice house of an artist that play a guitar and the house is open for the visitors.

There you can enjoy a beautiful sound of his guitar or also buy some nice artworks and natural goods that are exibited in a room with traditional Istrian fireplace, called in Istria “ognjiste”.

Outside the walls, on the eastern part of the town, inside the town’s old bastion, there is Humska Konoba tavern where you can taste some good Istrian food.

In addition, outside the town, on a small hilltop, where the Hum’s cemetery is located, there is another church of Hum that is worth a visit. It has the typical Istrian architecture of smaller churches and dates back to the 12th century.

This is the Church of St. Geronimo and inside you can see some valuable fresco paintings from the 12th century, ordered by the Aquileia Patriarchs, with features of Romanesque art and strong influences of Byzantine art.