Brijuni – Brioni: “One of the most important documents for the Non Aligned Countries foundation, Brioni Declaration, was signed on the Brioni islands in July 1956”

Kupelwieser was successful in attracting to the islands Statesmen, members from the Royal families, rich industrialists. Some of his friends also built jointly with him their villas on the islands. Brioni had also the first golf court in Istria developed by Paul Kupelwieser’s son.

At the same time, Kupelwieser, organised large archaeological excavations and the findings were used to refine the natural beauty of Brioni. A new port was built, a water supply system from Fazana was brought to the island and also the electrical plant was created. Four luxury hotels and a number of individual villas in the Art Nouveau  style represented the main hosting capacity of the islands. 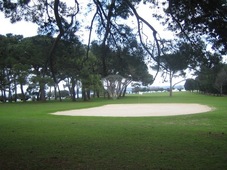 During the Italian rule, Brioni’s hotels were the seat of the Italian Naval Academy. Later on Brioni became one of the most popular centres in Europe for polo. Again most influential personalities of the World were Brioni’s guests.

The ships: Saturnia and Vulcania from New York and Trieste continued to bring guests to Brioni.

The Brioni company, one of the most famous Italian men suits companies in the World is named according to this islands and their symbol is a polo player on the horse. If you buy a Brioni suit and take a look inside the jacket you will note the symbol with the polo player.

In 1930 Kupelwieser’s son Karl committed a suicide and the Italian Ministry of Finance became a new owner of the islands. The State ownership contributed to the loose of the prestige of Brioni and later on the Yugoslav president Tito restored the past glory of the islands and helped to preserve its natural beauty.

In a certain way what Kupelwieser was doing by gathering the cosmopolite society of the Austro-Hungarian Empire Tito tried to do it on the World level.

Brioni is today also famous as the place that hosted numerous Statesmen and important political meetings. Some major political events were hosted on the Brioni islands after Yugoslav president Tito chose Brioni as his official residence. One of the most important documents for the Non Aligned Countries foundation, Brioni Declaration, was signed on the Brioni islands in July 1956. 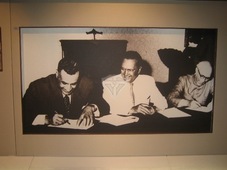 The Brioni Declaration was signed on July 19th, 1956 by Gamal Abdel Nasser (Egypt), Josip Broz Tito (Yugoslavia) and Jawaharlal Nehru (India). Indira Gandhi once said about the rational of the movement that it was not a mere and casual collection of individual States but was a vital historical process. The idea was about commingling of many historical, spiritual and cultural streams.

During your visit to the Big Brioni you can take the opportunity to visit biographic museum of Josip Broz Tito. You will see some of the 90 World leaders from sixty  countries that Tito hosted on the islands until 1979 that was the last time he was on the islands. 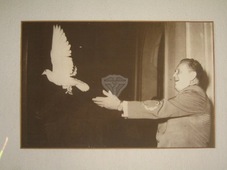 Due to Tito’s commitments and activity for the World peace with the Non Aligned Countries’ activity and his personal activity during the Cold War this islands were also named “The Islands of Peace”.

I would also remind you not to miss to visit the oldest olive tree in Istria that dates back into the 4th century.

This olive tree, almost 1700 years old, was many years ago hit by a thunder that divided it into two parts but did not kill it and even today it continues to produce olives after 17 centuries.