Buje – Buie d’Istria: “Bullea, Bulla, Bulya... Watchman of Istria with the sculpture of “The Goat” of Giorgio Celiberti”

Opposite to the church there is town museum. In the museum you can see a rich ethnographic collection and the exhibition of traditional crafts.

Not far away from the museum and the church there was a Municipal Loggia. Today, there is a sculpture of “The Goat” of Giorgio Celiberti. Similar sculpture made by the same artist can be found by the town gates of Sv. Lovrec Pazenaticki. 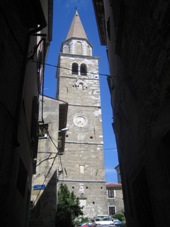 From this square you will see the narrow road that takes you towards the main, 48 meters high, bell tower of Buje. This bell tower from 1482 is the bell tower of the Parish Church of St. Servulus. It seems that this church has been raised on the location of an antique Roman temple because numerous remains, especially parts of columns and inscriptions, were built into its walls. It is known that on the site of the current church in 1306 already existed a church with a bell tower.

During the Baroque reconstruction from 1754 to 1768 the original three naved church was transformed into single naved church following the project of the architect Zuane Dongetti from Piran.

The façade remained unfinished, like in Umag, lacking the decorative final part. 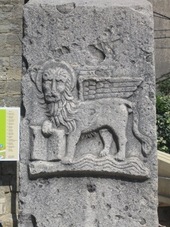 Opposite the church you will see the elementary school and the Neoclassical former Municipal Palace from 1878. On the façade of the building there is another Lion of St. Mark that in the 17th century was located above the main gates of the town, near the defence tower of S. Leonardo. 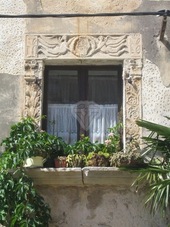 The most interesting secular building on the main square, on the left side of the bell tower, is the Gothic palace from the 15th century. It has a very pretty windows and in the past it had a lovely painted façade. If you continue to walk down the road passing by the Gothic palace, you will arrive near the small Church of St. John in Crosera from 1788.

A number of valuable patrician houses and palaces dating back to the period of the late Baroque can be found in the urban centre of the old town. If you walk towards the right side of the Church of St. Servolus it is worth looking for the courtyard with a nice well from 1784. 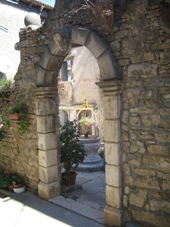 Once you find the door of the courtyard you will see the well. You will recognise the door by the Mocor’s ball on the top.

Mocor was the nickname of the brothers Tagliapietra.

From here you can walk outside the walls towards the Venetian defence tower of S.Leonardo built in 1458.

Opposite the tower you will see the gate towards the old cemetery and there is a small Church of St. Martin from 1598.

Few kilometres outside the old town of Buje, on the road towards Plovanija, on the north of Buje, there are two recommended truffle houses where you can taste some of the best Istrian food: Konoba Malo Selo in Fratrija village and La Parenzana in Volpija village.

Buje was a prehistoric hill fort and later on it became known as the Roman settlement named Bullea or Bulla. According to some opinions, the pre Romanian name could have been Bulya.