In the Middle Ages the various names have been Castrum Uvege, Bugia, Bugle, Castrum Bulge. In the 12th century the Arab geographer El Edrisi named it Bug-lah.

Like all other Istrian towns Buje also changed many rulers. After the Romans, the town was ruled by the Byzantine Empire and later on by the Franks.

In 1102 it was donated to the Aquileia Patriarchs by the Istrian Marquis Ulrich II of Weimar and was named Castrum Bulge.

Buje was until 1412 under the Patriarch rule. In the mean time it was named also Bulea and in this three centuries was involved in few local battles as well as living through a short period of being a free municipality. 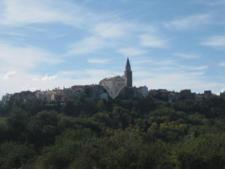 In 1412 the Venetians conquered Buje and in 1420, after the fall of the Aquileia Patriarchs dominions in Istria, Buje passed definitely to the Venice Republic and remained part of it until its fall 1797.

After the fall of Venice Buje passed to the Austrian Empire and was also for a short period of time under the Napoleonic rule.

In 1991 with the fall of Yugoslavia and the founding of the Republic of Croatia, the internal republic boundaries were recognised as the state boundaries and Buje is today part of Croatia.

In 2013 Buje became part of the European Union. You can not change the past but you can try to learn from it.

The main aim of the European Union founders was to build a system that could avoid future wars and future refugees in Europe as I explain in COSMOPOLITE.

The whole story is always much longer and complicated but this overview should only serve to introduce the reader in the richness and complexity of the Istrian cultural heritage.