Bale – Valle: “Bale is a lovely, picturesque, stone built, Istrian town and Giacomo Casanova was one famous visitor of Bale“

You can enter the old town and pass below the main gates. The stone paved streets are similar to those you can find in Rovinj and other medieval Istrian towns and villages.

There are some assumptions that both churches façades could have been inspired by some drawings made by Andrea Palladio.

The Parish Church hosts the stone sarcophagus from the 8th century with bones of St. Julian Cesarel who died in the 14th century. St Julian is also the protector of Bale.

The other art works hosted in the church are: the wooden Romanesque crucifix, the large painting “The Visitation” made by Matteo Ponzoni, and a wooden altar from the 9th century. There is an interesting well near the back of the Parish Church. Historically it is likely that in that place there was a defence tower.

You can exit this circular street in the northern part of the village and visit the street and houses that are placed outside the town walls.

There is another medieval church with interesting Romanesque bell tower. It is the Church St. Elias from the early Middle Ages. This church is among the oldest existing churches in Istria.

This church is located few hundred meters towards west from the old town nucleus. You can take the car and park fifty meters before you join the road to Rovinj. To visit it you will need to ask the people from the village to show you the way and other people to allow you to cross their court yard because is not located on the main road and the access is not well indicated.

In a decade time Bale could became a very nice vacation place once the project Town Hotel Mon Perin is completed.

In Bale’s photo gallery you will find several pictures of this lovely Istrian village. 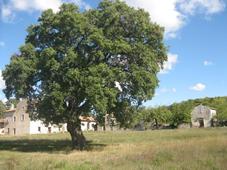 Just few kilometres outside Bale on the old road that goes towards Sv. Lovrec you will find the indications for Stancija Bembo that belonged to the Venitian family Bembo.

Bembo family was administrating Bale for several centuries. This property was built during the mid of the 18th century and is similar to the other important countryside Istrian families properties built outside the towns.